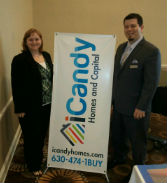 John and Janelle Swiercinsky attended Mega Partnering V, a wealth and networking super-conference in Dallas, TX, at the beginning of May. iCandy Homes and Capital had a banner on display and John presented a company spotlight, exposing the company to more than 700 other successful entrepreneurs. The Swiercinskys met Eric Trump, Steve Wozniak, Nido Qubein and rock superstar Bret Michaels, in addition to many other featured speakers at the conference.

Get a Cash Offer in under 48 hours